Email ThisBlogThis!Share to TwitterShare to FacebookShare to Pinterest
Labels: CHUCKMAN'S PLACES - HYDE PARK CHICAGO - PHOTO - CHICAGO - MAN BURNING LEAVES AT THE CURB - WOODLAWN AVE - THE IMAGE COULD AS READILY HAVE BEEN SEEN IN SOUTH SHORE TOO - HOW I REMEMBER THIS CUSTOM 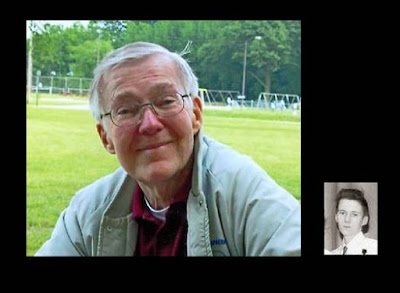 So sorry to just come upon this.

Bill and I were best friends around the ages of ten to thirteen or fourteen. We went many places together. I had an interest in building little rockets at the time and often went over to Bill’s so we could “blast one off” in Rainbow Park. Of course, we also loved the beach.

We joined Boy Scouts together - Troop 594 in the South Shore neighborhood, Chicago - and had many goofy adventures on overnight trips, like the time we had to put up our pup tent in the rain at the Indiana Dunes. Later, talking under flashlight inside the tent under the tapping of the rain with one of those big cans of Jay’s Potato Chips between us and some Frosty’s root beer or other favorite. Swinging on a rope swing attached to a tree and leaping off down the sand dune.

Scout meetings were on Friday evenings, and fairly often Bill and I had a pizza – cheese - at Ray’s Pizzeria on 75th Street, a legendary place in South Shore, before the meeting. Such simple, memorable things. The Troop met in the basement of South Shore Presbyterian Church on 76th near South Shore Drive.

An event still vivid in memory was the time during the first winter of high school, we were walking home from South Shore along 78th Street. The old apartment buildings were beautifully trimmed with snow frosting, and we started throwing snowballs at kids passing from behind some bushes.

That was when I met Pat Golden with her beautiful long dark braid swinging as she walked, her nappy dark blue coat, her knee socks, pink-tinged full cheeks, and carrying her books in front of her, as was the custom for girls then. I was stricken, and I had a crush on her right through high school, but I was quite a shy boy.

Bill later became close to Evelyn “Mike” Duffell, and they could be seen between classes walking together, Bill’s arm behind her, guiding, a very defining gesture of Bill’s.

Bill lived at that time with his mom and dad in clapboard apartment building, which resembled a grand old private home, on South Shore Drive near 77th. The third floor. The back porch looked out into Rainbow Park. There are photos of the building on my site, Chuckman’s Places at

See also our 6B class picture.

Bill had a really decent side to him. In 1955, I was new to South Shore, and to Bradwell Elementary School, and I had a very unhappy experience with an insensitive home room teacher who had me stand up before the class and answer some questions about myself.

You see, my mom and dad were divorced, quite a rare thing in 1955, and just a reference to my father could send me into tears.

When she asked me about my father, I broke down and cried in front of the class. What a way to be introduced to your new school classmates.

Later, at recess, Bill and Preston Uney approached me in the schoolyard to make friends and make me feel better about what had happened. It would be hard to overstate how much I appreciated that gesture.

Once we were in high school, Bill and I drifted apart. I guess in part because he spent a lot of time with “Mike,” who often came over at lunchtime in the cafeteria to the table where Preston and I sat and joked around. She loved telling offbeat jokes. Through high school, I remained a good friend of Preston Uney’s, who lived just south of 79th and Kingston with his mom and dad and two older sisters.

I see Bill lived in Western Michigan. I assume he taught there because I know he became a teacher. That coast was one of my favorite places on earth when I was in my forties. Giant sand dunes, peach orchards, lovely farms, and the dramatic beauty of Lake Michigan. I vacationed south of where he and his family lived many times. I hope he loved it as much as I did.
at July 31, 2019

My old good friend, Preston E. Uney (Bradwell 1959/ South Shore 1963), died on July 7, 2008. He was an aeronautical engineer living with his wife and children in Colorado.

Preston's dad ran a small toy store on Stony Island in the 1960s until the changing neighborhood destroyed his business. The family lived for many years in a small house on Kingston Ave. just south of 79th.

His older sister, Marie, taught us both to dance, however awkward the results. His father, an immigrant from Russia, used to tell electrifying stories of the Russian Front in WWII.

Preston was an interesting independent-minded kid who must have been the only student carrying a Socialist Labor Party sign around South Shore High in the 1960 Kennedy-Nixon presidential campaign. He will be missed.


NOTE TO READERS: I AM ALWAYS INTERESTED IN OLD SNAPSHOTS OR OTHER MATERIALS WHICH SHOW ASPECTS OF SOUTH SHORE LIFE, ESPECIALLY AROUND THE 1950s AND 1960s. THERE ARE SEVERAL PLACES FOR WHICH I HAVE YET TO DISCOVER ANYTHING. IF YOU HAVE ANY WORTHWHILE OLD PHOTOS, I WOULD APPRECIATE RECEIVING A SCAN FROM YOU FOR POSTING ON THE SITE. YOU WILL BE CREDITED.
at July 31, 2019

Email ThisBlogThis!Share to TwitterShare to FacebookShare to Pinterest
Labels: CHUCKMAN'S PLACES - SOUTH SHORE CHICAGO - IN MEMORIAM: PRESTON UNEY, GOOD FRIEND - IN HIS LAST YEAR AND A CROP FROM BRADWELL CLASS PHOTO - 1955, MY OLD

Readers who enjoy Chuckman’ s Places – and there are many - may also enjoy my new site, Chuckman’s  Bits and Pieces of the Past at:

Email ThisBlogThis!Share to TwitterShare to FacebookShare to Pinterest
Labels: READERS OF CHUCKMAN'S PLACES MAY ALSO ENJOY... 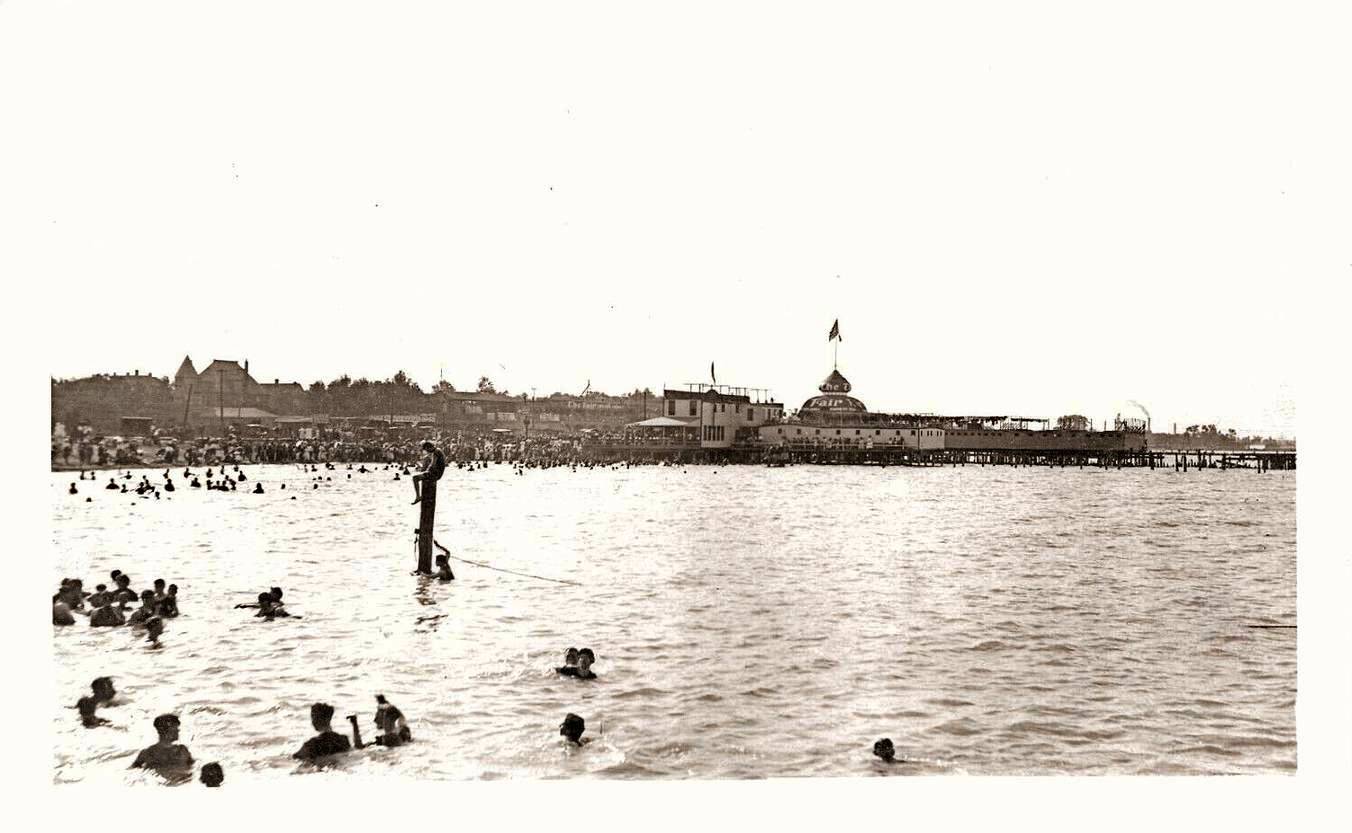 CHUCKMAN'S PLACES - SOUTH SHORE CHICAGO - PHOTO - CHICAGO - COMMERCIAL BUILDING ON SE CORNER OF 71ST STREET AND BENNETT AVE - AN ELABORATE PEDIMENT STRUCTURE WITH THE BUILDING'S DATE FROM THE HEYDAY OF CHICAGO'S BRICK AND TERRA COTTA TRIM BUILDINGS - WE HAD MANY BUILDINGS IN SOUTH SHORE USING THESE MATERIALS, INCLUDING OF COURSE MYRA BRADWELL ELEMENTARY SCHOOL - NOTE THAT THERE IS ALSO A SMALLER BLACK-AND-WHITE PHOTO ON THE SITE SHOWING THE ENTIRE BUILDING - EDITED FROM AN IMAGE BY DEBBIE MERCER - IMAGE DATE UNKNOWN 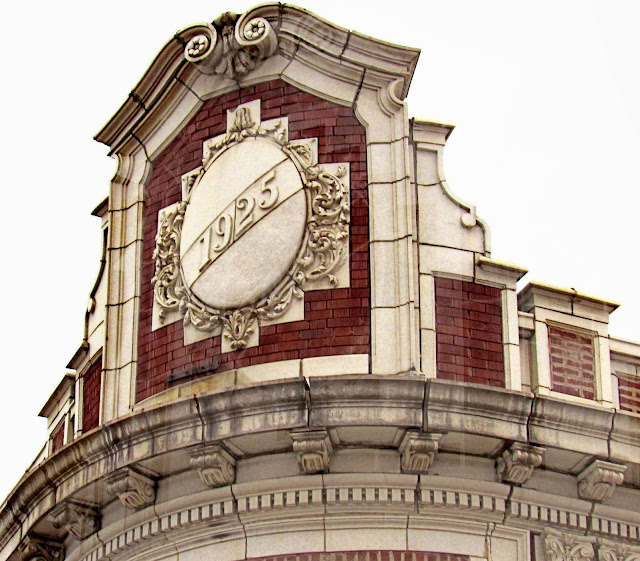 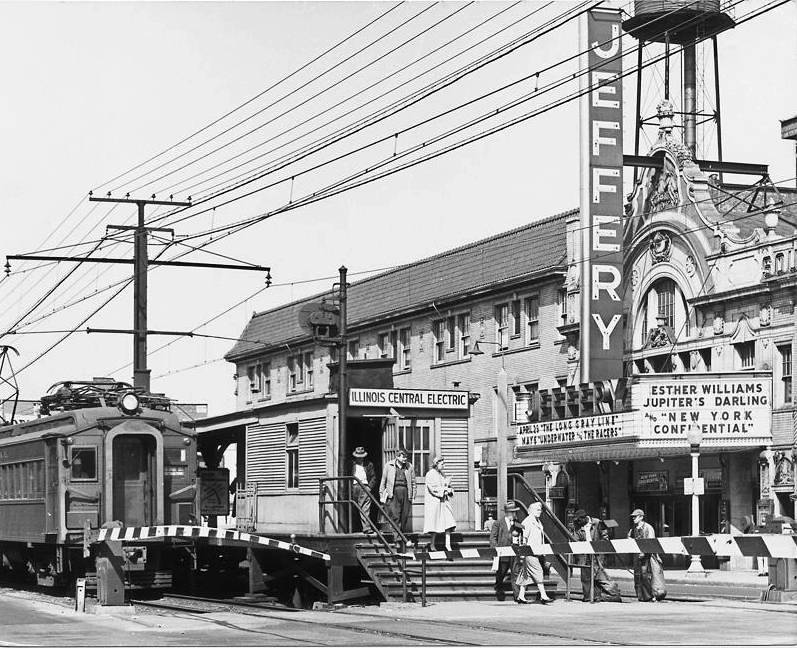 CHUCKMAN'S PLACES - SOUTH SHORE CHICAGO - PHOTO - CHICAGO - JEFFERY THEATER - 1952 E 71 ST - AUDITORIUM INTERIOR - A WONDERFUL FIND - WE ALREADY HAVE A LOBBY PHOTO OF THE JEFFERY ON THE SITE - NOTE: THE AVALON WAS MY FAVORITE OF OUR LOCAL MOVIE PALACES BUT THE JEFFERY WAS A CLOSE SECOND - JUST A WONDERFUL EXPERIENCE GOING TO ONE OF THESE PLACES FOR A DOUBLE FEATURE AND GETTING A BIG CONTAINER OF FRESHLY-POPPED BUTTERED POPCORN AND MAYBE A CANDY BAR - THE ATMOSPHERE WITH THEATRICAL LIGHTING AND ROMANTIC ARCHITECTURE WAS SO EXCITING AND MYSTERIOUS - TRULY LIKE NOTHING AROUND TODAY - ARCHITECTURAL PHOTO LIKELY DATES TO OPENING AS A VAUDEVILLE THEATER IN 1924 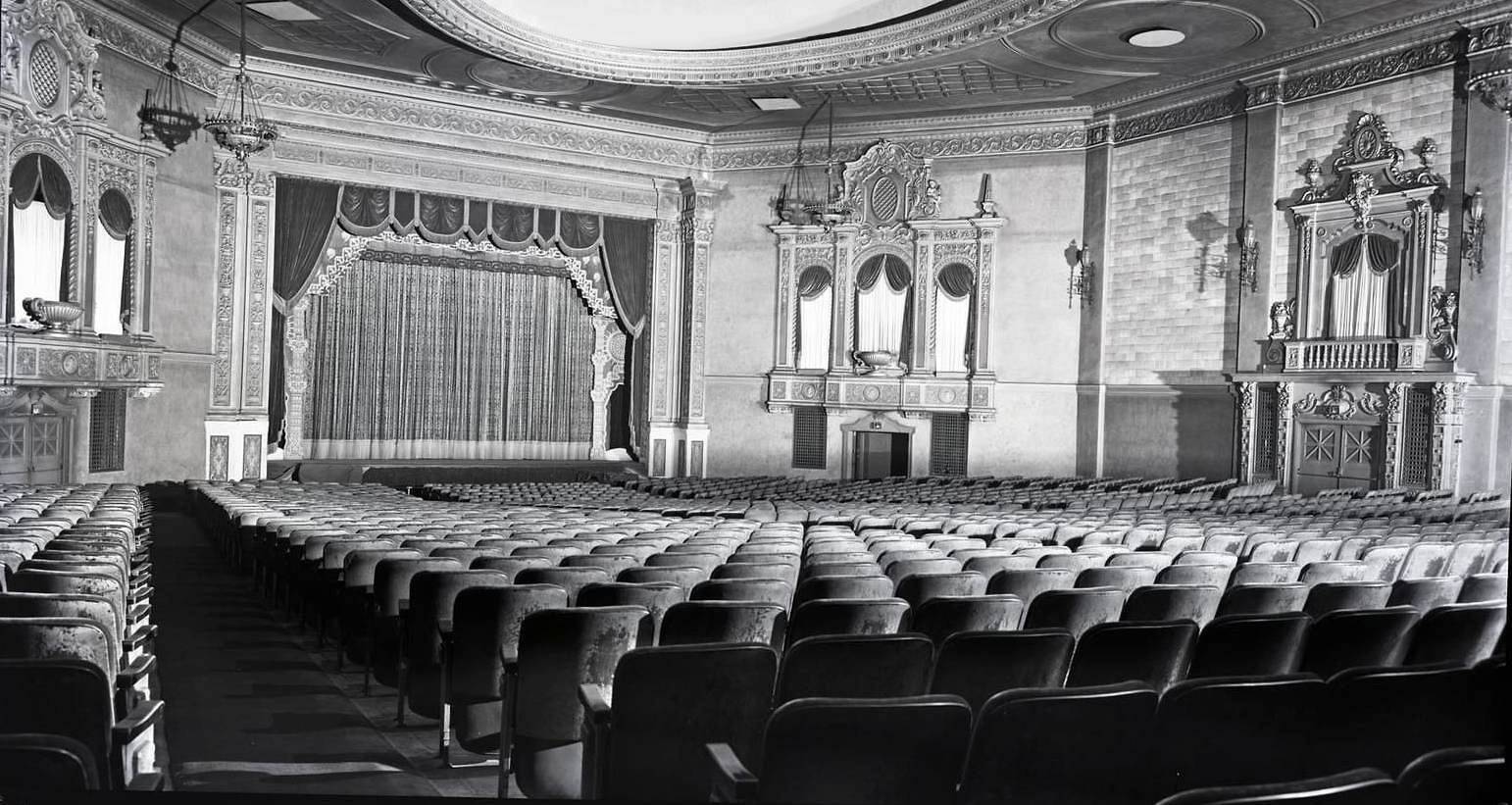 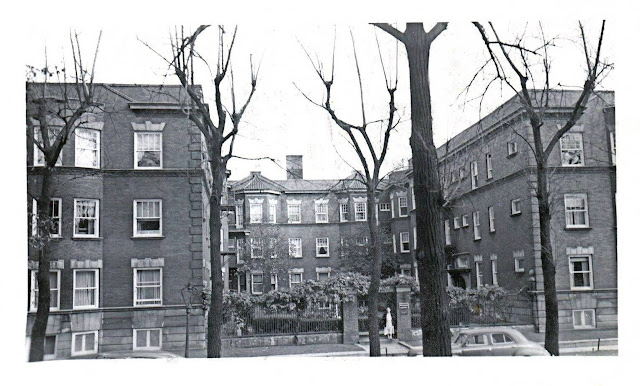 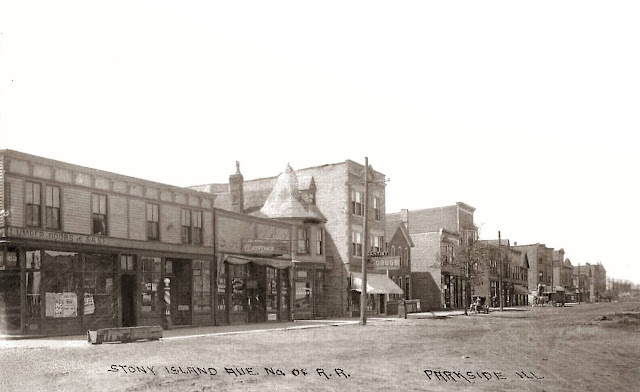 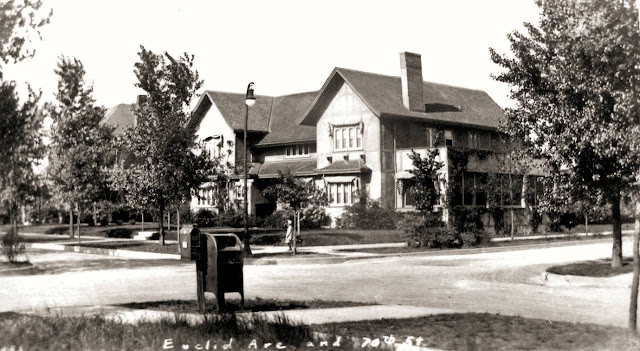 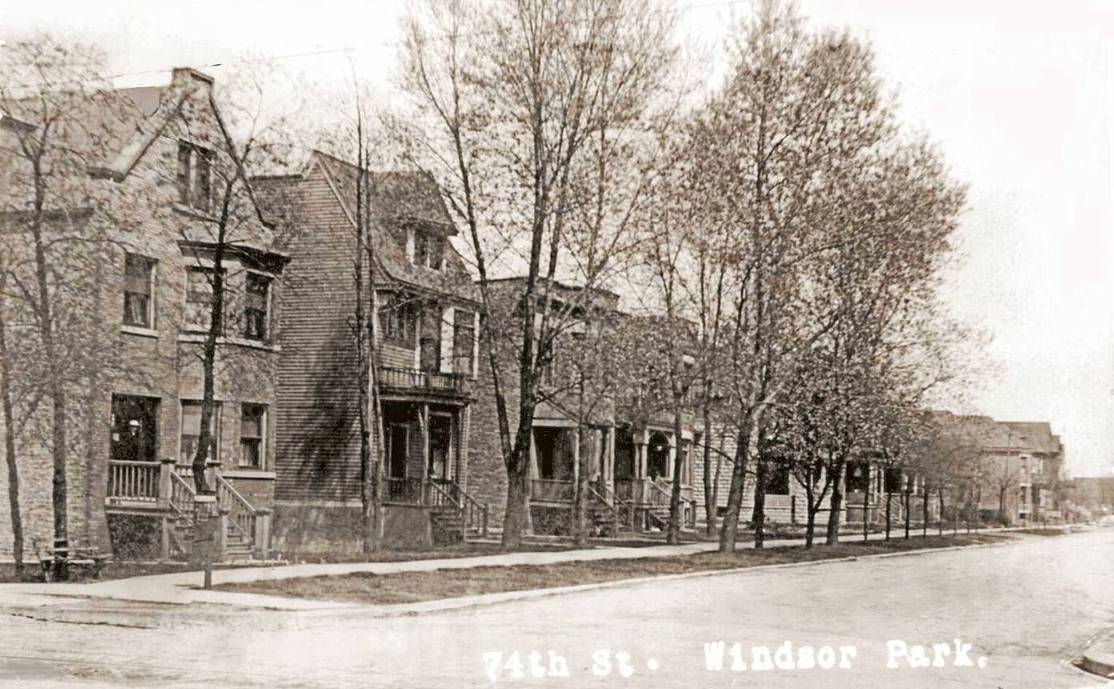 CHUCKMAN'S PLACES - POSTCARD - SOUTH SHORE - CHICAGO - 74TH PLACE - W OF COLES TO RR AVE (CALLED THAT - MAYBE EXCHANGE?) - NEW HOMES AND TREES - 1910 - A NOTE ON OLD REAL ESTATE AND APARTMENT CARDS: THESE WERE THE MLS LISTINGS OF THEIR DAY - PEOPLE USED THEM TO DECIDE WHICH PROPERTIES TO VISIT - THEY WERE ALSO MADE PRIVATELY BY PEOPLE TO SHOW DISTANT FRIENDS OR RELATIVES WHERE THEY LIVED - THERE WERE KITS YOU COULD BUY TO CONVERT PHOTOS INTO POSTCARDS - THE PRIVATE ONES EXPLAIN THE OFTEN POORLY-WRITTEN LABELS

CHUCKMAN'S PLACES - POSTCARD - CHICAGO - SOUTH SHORE - RAINBOW BEACH - CALLED WINDSOR BATHING BEACH - AERIAL PANORAMA FROM JUST N OF 75TH - HUGE CROWD - RESEMBLES A BRUEGEL PAINTING - ANOTHER VERSION - TINTED - c1910 - NOTE WHAT BECAME RAINBOW BEACH LATER WAS THEN COMPOSED OF SEVERAL SEPARATE BEACHES - THE BEACH HOUSE IN THE DISTANCE TO THE RIGHT WAS A PRIVATE BEACH CALLED NICHOLS - ANYONE COULD GO BUT YOU PAID - FURTHER UP THE ARC OF THE BEACH WERE OTHER STRUCTURES AND IT ENDS AT A SOUTH-END PARK CALLED ROCKY LEDGES (SOUND FAMILIAR? THERE'S CARD FOR IT ON THE SITE) - WHAT BECAME RAINBOW WAS THEN SAID TO BE ONE OF THE NICEST AND THE LARGEST OF THE "NATURAL" BEACHES (SOME BEACHES IN THE CITY BEING ARTIFICIALLY EXTENDED OR CREATED)

Email ThisBlogThis!Share to TwitterShare to FacebookShare to Pinterest
Labels: CHUCKMAN'S PLACES - POSTCARD - CHICAGO - SOUTH SHORE - MYRA BRADWELL SCHOOL - 7710 S BURNHAM (DO NOT REALLY KNOW WHETHER ADDRESS WAS THE SAME FOR THE OLDER BUILDING) 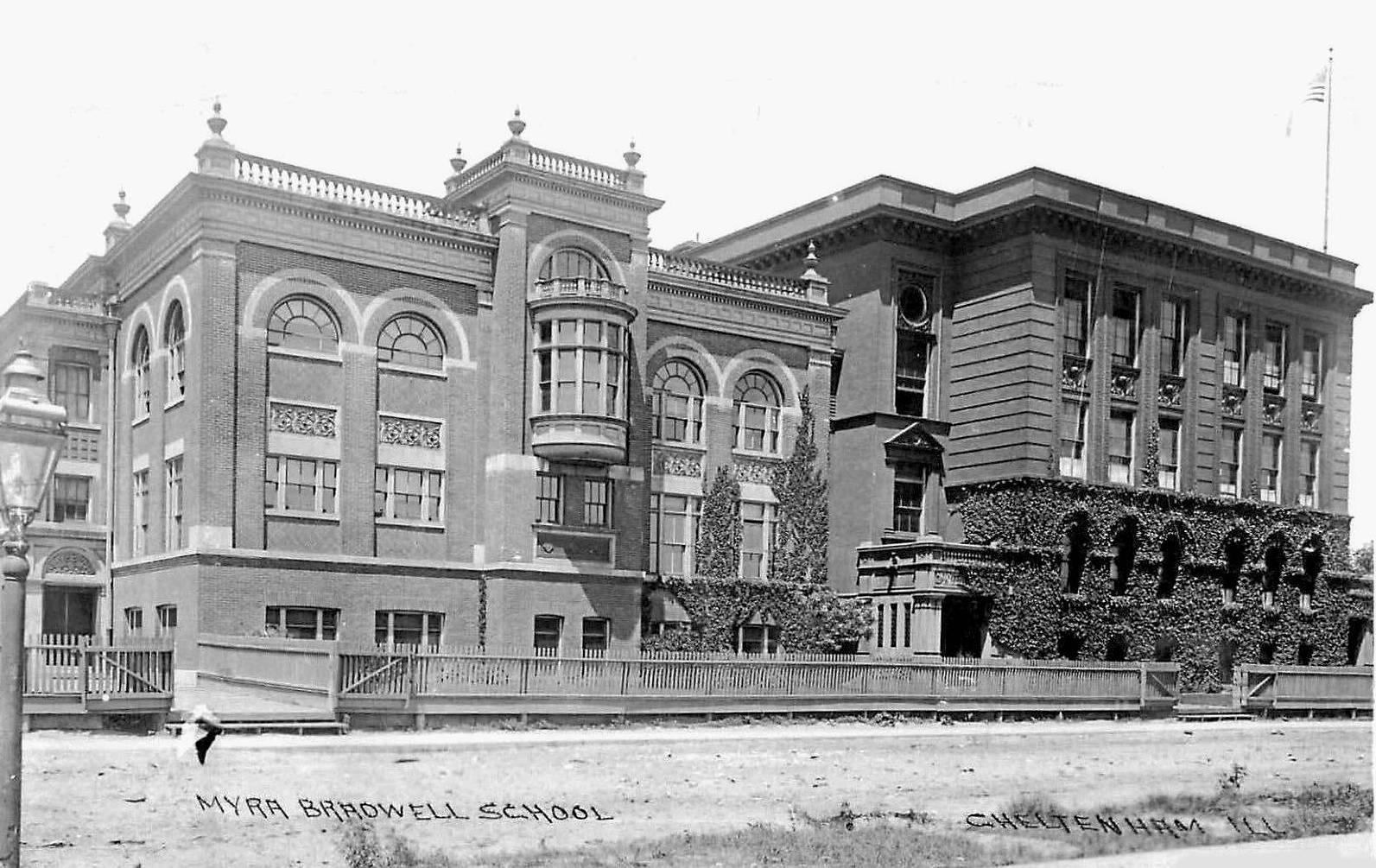 Email ThisBlogThis!Share to TwitterShare to FacebookShare to Pinterest
Labels: CHUCKMAN'S PLACES - PHOTO - CHICAGO - 53RD AND BLACKSTONE - HYDE PARK - STREET SCENE - YMCA - DRUG STORE - WESTERN UNION - I QUITE LOVE THIS IMAGE FOR SO CAPTURING A SENSE OF THE ERA 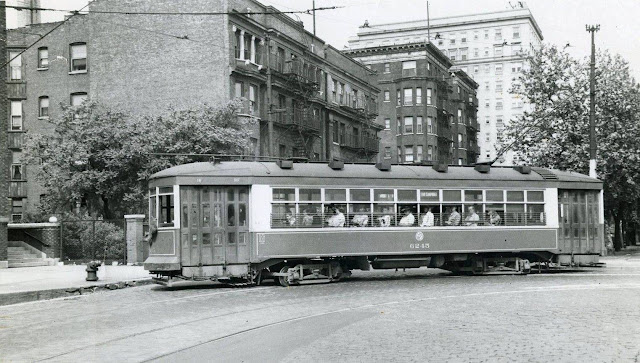 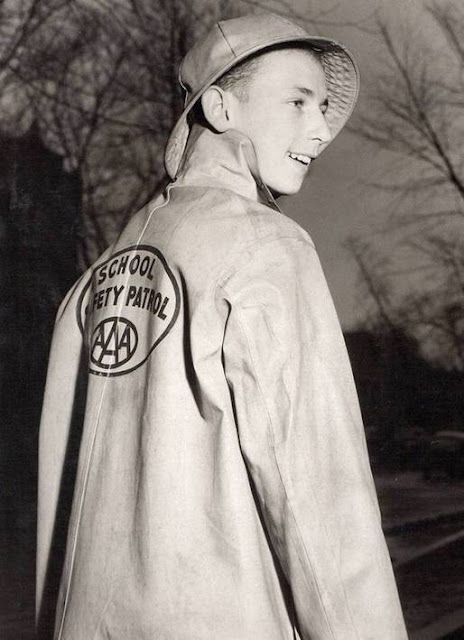 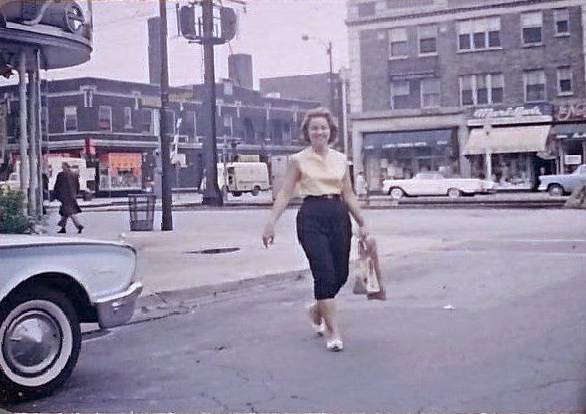 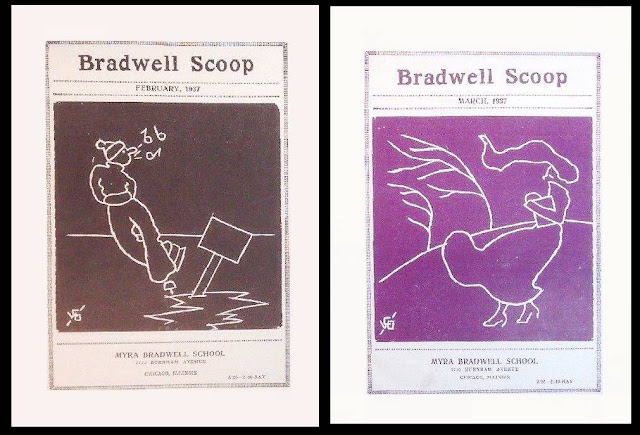 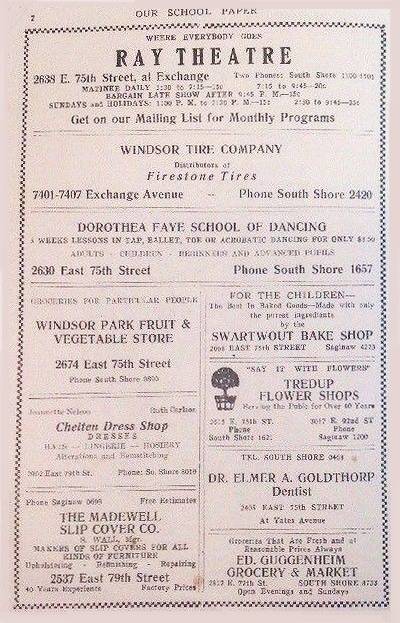 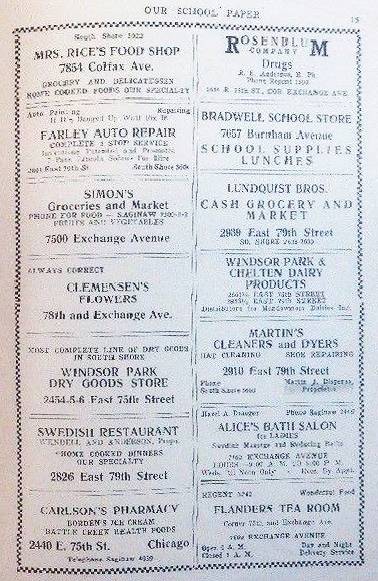 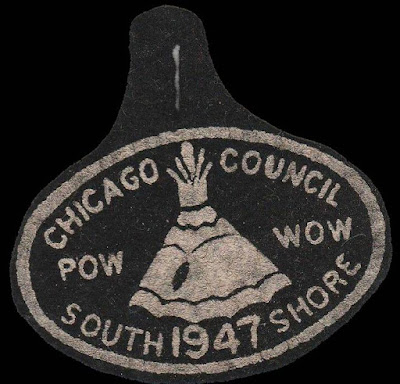 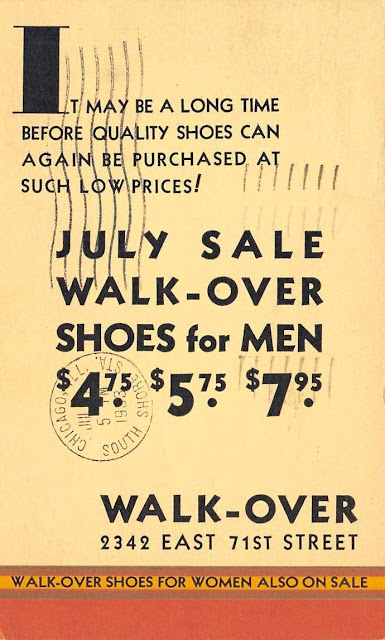 Email ThisBlogThis!Share to TwitterShare to FacebookShare to Pinterest
Labels: MARTIN’S RESTAURANT – 2015 E 71ST STREET – S SIDE OF 71ST ACROSS FROM CHAPPEL – FIVE CENTS

Email ThisBlogThis!Share to TwitterShare to FacebookShare to Pinterest
Labels: CREST TAP AND RESTAURANT – 2547 E 75TH STREET – S SIDE OF 75TH ABOUT HALFWAY BETWEEN KINGSTON AND COLFAX